2018 began as 2017 ended, my wife, kids and I were happily living in Washington, D.C. surrounded by current events in both work and life. 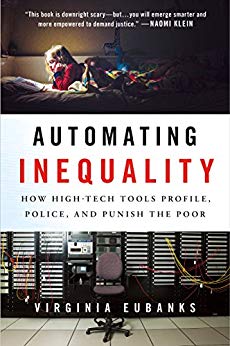 I began the year by reading Automating Inequality: How High-Tech Tools Profile, Police, and Punish the Poor by Virginia Eubanks.  This book helps you understand how bias is introduced into systems and is super relevant for folks working on or thinking about building prediction or filtering systems.

James Comey’s book gave me a better understanding of the FBI, it’s culture and relationship with the White House and DOJ. I liked the examples of empathy and reading people that he used throughout the book. Paying attention matters.

Artificial Unintelligence: How Computers Misunderstand the World by Meredith Broussard was excellent and I’ve recommended it to many of my teammates.  She talks a lot about algorithm accountability, ethics and bias.  Her simple “Titanic” data science example is fantastic.

The President Is Missing: A Novel by James Patterson and Bill Clinton was a mystery thriller based on cybersecurity threats.  My wife and I had fun going to hear Clinton and Patterson speak during their book tour stop in D.C.

Yes We (Still) Can: Politics in the Age of Obama, Twitter, and Trump by Dan Pfeiffer was “candy” for me as Chris Matthews describes it.  I love books like this that tell stories in an easy-to-read, funny style about the inside baseball of politics and White House goings-on.  I’m a huge Pod Save America fan and got a chance to see Dan talk with Alyssa Mastromonaco in DC during his book tour which was awesome.

The Devil in the White City: Murder, Magic, and Madness at the Fair That Changed America by Erik Larson was a really fun read for me since I rarely dig into non-fiction that reads like fiction.  I combined audible with the paperback and took a while to get through it.  Coincidentally, I finished the book on the Blue Line train into downtown Chicago.  I really want to visit Jackson Park now and see some of the old buildings.  A big takeaway was learning about all of the things that were introduced in the World’s Fair like the Ferris Wheel.

The Red and the Blue: The 1990s and the Birth of Political Tribalism by Steve Kornacki is a must-read for people interested in the current political climate and divide in this country.  It chronicles events from 1984 through 2000 talking about Clinton, Bush and the Gingrich Republicans.  Every chapter I was thinking “oh wow, so that’s what caused that thing we struggle with today.”

Medicare and Medicaid at 50: America’s Entitlement Programs in the Age of Affordable Care by Alan B. Cohen, David C. Colby, Keith A. Wailoo and Julian E. Zelizer is a very wonky read by helpful to understand the history of Medicare policy.  Since this directly impacts my work, it was super interesting for me.  The biggest story I’ve been telling from the book is about the role Medicare played in the Civil Rights Movement.  In healthcare, money drives so much of the behavior.  That was true then and is true now.

I started at least ten books in 2018 that I haven’t finished. This stressed me out for a bit then I read a quote about how having books laying around is good for you because it spurs thought, even if you don’t read every word. I loved this.

Now that 2018 is in the books (pun intended) and we are back in our hometown of Denver, CO, I still maintain my Politics & Prose membership and have added a Tattered Cover membership. Books, bookstores, reading and just being around books gives me so much mental energy, even if I don’t read every word 😉

View all posts by ktinboulder